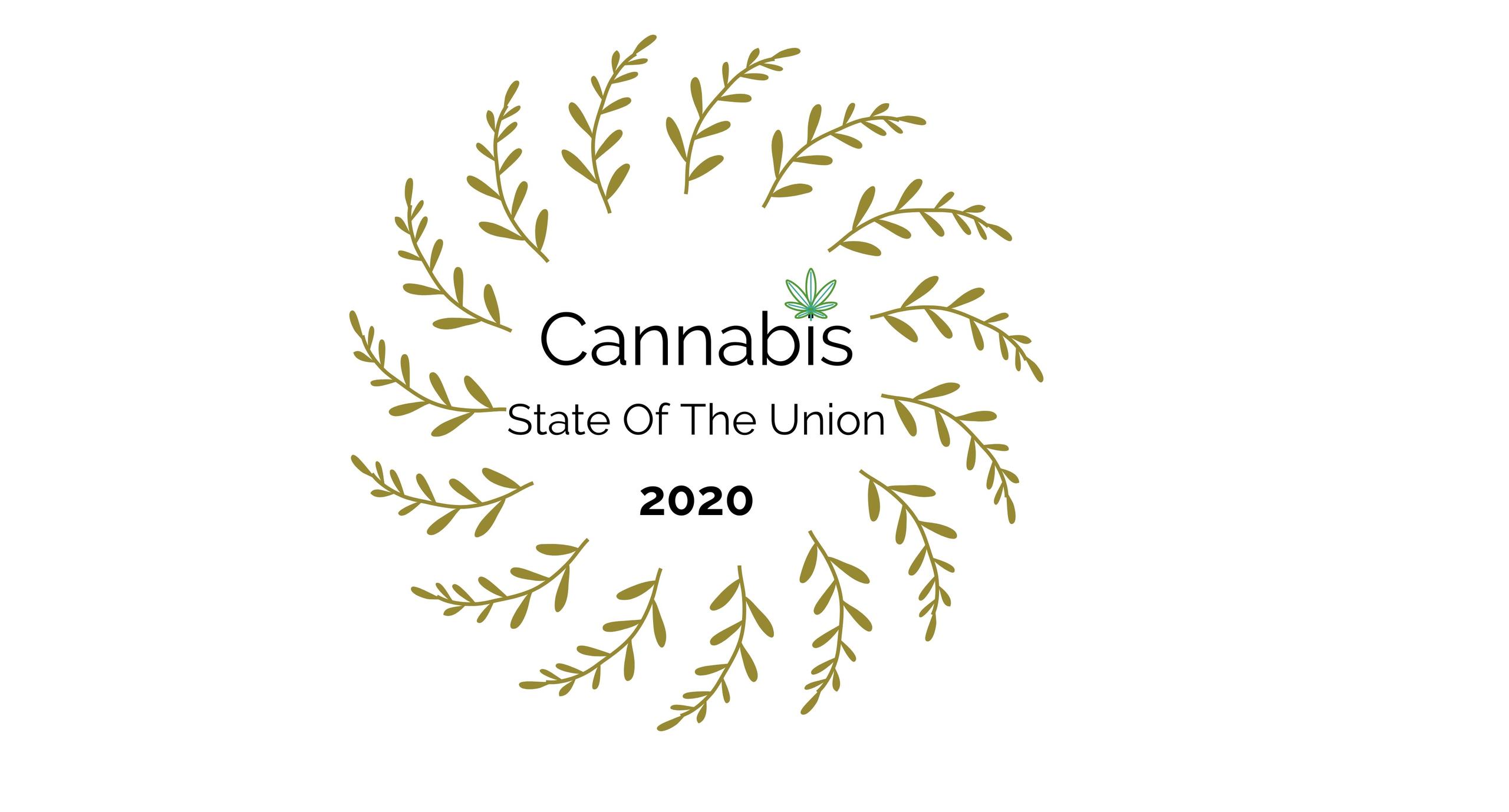 Before heading into 2020 and taking a look at the state of the cannabis industry, let’s dive back into the changes that 2019 presented. Although no additional state legalizations were passed, legal cannabis sales jumped 32 percent since 2018, the U.S. House of Representatives passed the SAFE Banking Act, and Alaska and Colorado both signed laws restructuring the way their residents could partake in consumption.

In 2018, Marijuana Business Daily conceptualized a chart that presented staggering numbers for the future, at least through 2022, of the cannabis industry. The growth possibility was firmly within upward of $21 billion by 2022, which was coined $22 in ‘22. These statistics came from an assortment of factors, including legalization efforts, new products, and the boom in recreational sales. With that amount of capital, coupled with wavering legislation per state, it had been notoriously difficult for banks to take on cannabis-related clients.

Introduced on March 7, 2019, H.R. 1595, or the Secure And Fair Enforcement (SAFE) Banking Act of 2019, prohibited “a federal banking regulator from penalizing a depository institution for providing banking services to a legitimate marijuana-related business.” The over-arching purpose of the legislation is to eliminate ambiguous banking scenarios. Banks avoid dealing with cannabis-related business so as not to get tangled in violations of federal drug and money laundering regulations. H.R. 1595 declares that financial services, including loans, can no longer be denied to cannabis businesses, nor can banks deny those, with ties to the cannabis industry, assistance. Additionally, banks, as institutions, can’t be penalized for working with cannabis industry professionals. It passed with a 45 to 15 vote, advancing it one step closer to law. This bill has been in the Senate since September 26, 2019. If well received, it will end up in the Oval Office for final review.

In March 2019, Alaska Republican Lt. Gov. Kevin Meyer greenlit regulations for on-site consumption at established marijuana dispensaries. The rule, effective as of April 2019, gives local governments jurisdiction over each’s respective county. Freestanding establishments can now apply for state endorsements, which include rules regarding the space in which consumption is allowed, what ventilation technology will be required, and monitoring systems for employees.

Following those regulations, the city of Anchorage proposed a new ordinance for “cannabis cafes”, businesses where legal cannabis can be consumed. Mayor Ethan Berkowitz and Anchorage’s director of economic and community development, Chris Schutte concluded that the city, which runs its own licensing system for commercial marijuana, lacked places for its citizens to legally consume. Due to local smoking bans, which include tobacco products and marijuana smoke, Alaskans are able to eat, but not smoke or inhale, cannabis products.

In Colorado in May, House Bill 1230, or the Marijuana Hospitality Law, which opens local infrastructure up to the idea of cannabis cafes, was signed into law by Gov. Jared Polis. Colorado makes $1.5 million a year with the legalization of marijuana, and the law goes into effect as of January 4, 2020. This is not subject to an immediate implementation, due to rolling county and city “opt-ins”. Marijuana hospitality businesses are planning to build onto existing structures, where both medical and recreational marijuana can be consumed in-house, in order to delineate specific smoking spaces. These portions of the business are all subject to local approval and require a marijuana hospitality establishment license; complying businesses will be exempt from the Colorado Clean Indoor Air Act, which prohibits indoor public smoking.

Additionally, a similar bill allows for cannabis delivery, which seeks to deliver medical marijuana starting in 2020 and recreational marijuana in 2021; this process would work in the same way that calling a pizza parlor would result in a hot pizza on your doorstep. House Bill 1234 would allow retailers and dispensaries to deliver cannabis products to customers’ homes and medical marijuana centers. A one-year permit is required in order for a business to be qualified to deliver, and a $1 surcharge off every delivery will go to the municipality in which the delivery takes place; this protects the deliverer from criminal prosecution. Addendums to this bill include one delivery a day/ consumer rules, private residences only, and no college campuses.

As the decade came to a close, there were murmurs of Illinois becoming the 11th state to legalize recreational marijuana. Back in 2013, Gov. Pat Quinn allowed Illinois to become the 20th state to legalize medical marijuana, but nothing had been decided on the recreational front. Effective January 1, 2020, Illinoisan consumers can purchase up to 30 grams of recreational marijuana, or cannabis-infused products containing up to 500 mg of THC, from licensed sellers, and the state is looking into additional licenses for dozens of new stores, processors, cultivators and transporters.

This legalization made fifty-five Illinoisan dispensaries $3.2 MILLION on the first day, and only six days later, Chicago shops ran out of marijuana. The nine dispensaries selling recreational cannabis in Chicago were met with tens of thousands of patrons in the first week post-legalization. This rush sent local growers into a tailspin, as they had been previously equipped to handle only small-batch medical marijuana; these growers had been expecting this boom since June 2019, yet still had only six months to expand their offerings to meet the anticipated demand. Unfortunately, this holding pattern will persist until the growers produce; due to wavering state regulations, states like Oregon and Washington, which unveiled recreational marijuana to a lackluster consumer base, are not allowed to sell their extra stock to Illinoisan dispensaries.

In terms of criminal intent, Illinois is restructuring how it deals with possession and DUI charges. For those Illinoisans convicted on prior possession charges of less than 30 grams, or one ounce, the state’s Prisoner Review Board will attend to cases, followed by a potential pardon by Gov. J.B. Pritzker. From there, the Illinois attorney general will seek to expunge the record. For 30-500-gram possessions, expungement is also an option.

This November 2019 study found that fewer than one-in-ten citizens prefer to keep marijuana entirely illegal, and the Silent Generation, those born between 1928 and 1945, continue to be the least supportive (35 percent favoring) of efforts to federally legalize. On the contrary, younger voters are more likely to vote to legalize, as 69 percent of those aged 18-29 said that legalization for medical and recreational is the right step.

“In 2020, hundreds of thousands of Americans will turn out to vote not for the top of the ticket, but for the rights of cannabis consumers in upwards of a dozen states,” said National Organization for the Reform of Marijuana Laws political director Justin Strekal. “As we have seen in previous elections, marijuana initiatives increase voter turnout in nearly every demographic. With public support growing by the day, 2020 will be the biggest year yet for expanding the freedoms and liberties of cannabis consumers.”

In terms of stock trends, 2018 boomed, while 2019 market shares, stock prices, and growth capital seemingly went up in smoke. With no historic data on the way the global stock market will react to a traditionally over-the-counter product, investing in cannabis-related stocks is a huge gamble. Visit the Global Cannabis Stock Index or The Marijuana Index for real-time stock exchange rates. For those interested in cannabis stocks and which to invest in, it’s simply impossible to predict, although Canadian stocks have been having moderate success recently. It’s all relative, of course, but the American stocks are cause for concern at the moment.

Profits from the wavering cannabusiness model are “lower-than-expected”, at best, and companies are expected to turn toward mergers to even survive; this comes after the cannabis industry was lauded as having a potential for multi-billion growth. Oregon and California are suffering from low producer prices stemming from a gross oversupply, and stringent CBD legalities and deaths tied to vaping have dealt cannabusiness a losing hand going into 2020.

Even still, an emphasis on edibles is on the horizon; the likes of mints, gummies, jellybeans, tablets, deodorants, and sprays are set to further entice consumers. Health Canada launched marijuana derivatives, which have a significantly higher profit margin than traditional dried cannabis. In the United States, the CBD industry brought in $600 million in 2018, and is expected to heighten to $23.7 billion by 2023. It was at this point that the FDA stepped in and began research on CBD, noting its unpredictability and the general public’s lack of knowledge on the long-term effects.

CBD is also being marketed to health connoisseurs in the form of infused coconut oil, body lotions, and wellness capsules. Until last week, Floridians were getting CBD-infused gummy bears, dog treats, and chocolate and effectively flying under the national FDA radar. Following a turnover in officials, new state-wide rules have been implemented and Florida inspectors are fanning out across the Sunshine State to ensure proper labeling procedures are being followed.

News in the beauty community came on January 8, 2020 when makeup giant Sephora partnered with Saint Jane, a new and independent CBD beauty company. Sephora will begin selling Saint Jane products in 22 states at 281 stores beginning January 10. For Sephora enthusiasts, take a trip to Sephora’s Indie Beauty Wall and get your hands on some CBD-infused serums and lip glosses.

Due to its federal restrictions, selling CBD-infused products on sites like Amazon is prohibited; the FDA warns against buying any CBD products from online distributors, as quality is questionable. CBD products, because the lack of federally imposed quality regulations, are notorious for false advertising. A boom in the cannabusiness set off a boom in the CBD and hemp business, creating a discrepancy of high prices and low quality. To check product quality standards, CBDreVu was founded in 2017 as an A+ rated Better Business Bureau Accredited website; the site highlights brand profiles for popular CBD products.

In the current state of cannabusiness, conferences and events are crucial for those networking to grow businesses, as well as growers seeking partnerships. Conferences like MJBizConNEXT, in June 2020, partnered with the Hemp Industry Daily Conference to throw a two-day, speaker-loaded showroom experience set in New Orleans. The speaker and event itinerary, as well as show floor experiences will be unveiled in January.

Additionally, June 2020 welcomes the Cannabis Business Summit and Expo in San Francisco. Held from June 15-17, the summit revolves around B2B networking and education via advocacy and community initiatives. Ticketing is already open, and has delineations based upon status as a regular member, a dispensary owner, a non-member, or an “Expo Only” participant.

For those interested in hemp, January 25-26 will usher in the Indo Expo, a diverse hemp conference. Hundreds of companies are expected this year with everything from specialty hemp products to growing equipment.

For those wanting to break into the cannabusiness, the CannaGrow Expo, held in Chicago on April 17-18, will walk conference goers through the art and science of growing cannabis. CannaGrow Chicago is open to all and is intended to help all growing processes through education, new technology, and techniques, taught by world-class growers. A 115+ exhibitor trade show is an added networking bonus. Early Bird rates for this convention are posted as well.

In terms of cannabis-centric events in 2020 that aren’t business trade shows, infuse your special day with cannabis by visiting the Cannabis Wedding Expo. Six locations around California, Nevada, Colorado, Massachusetts, and Ontario are set to help you find that missing piece. Whether you’re looking for cannabis bar vendors and marijuana bouquets or something more subtle, the vendors at this expo have you covered. Light up your ceremony with everything from wedding registry items and CBD-infused menu items to a “unity bowl” celebration.

In the current state of America, cannabis is on the cusp of blowing the roof off local and state economies. Nothing will make as drastic a difference as the passing of less stringent medical and recreational cannabis laws, especially at the national level. That, of course, remains to be seen, but with the amount of younger adults who are anticipated to hit the polls with legalization on the brain, federal changes could be closer than we think.